Setting up a Vagrant Machine for Electron

Last Saturday there was an interesting conference on Node.js in Desenzano del Garda where Feross Aboukhadijeh held a workshop about Electron. Since I am not enough skilled about Node.js I thought that, to attend the workshop properly, it would be worth to setup a clean VirtualBox VM to avoid any mess on my own development machine.

I am a Vagrant fan, so I’ve googled a bit trying to find a prebuilt Electron Vagrantfile provisioning all the packages I need. Unluckily I did not find any machine, so I had to set up it by myself.

Obviously I came across a set of small problems before to obtain a working version of this VM. This post describe this small journey I had to configure it.

The first stuff I’ve configured -as root user- were the basic packages required to manage a VM:

Electron comes as an NPM package, so I needed a clean Node.js environment to install it. First of all, I started to address the definition of a provisioning script to setup the Node Version Manager used to install a working Node.js version. Then I had to set a property to the vm.provider (i.e.: VirtualBox) to allow it to create symbolic links in the guest machine. In fact, as I read on the web, without this parameter NVM would not work:

This time, the provisioning script should run as the default vagrant user instead of root. It:

At the end of this script, I’ve also added the commands to setup the latest version of Liquidprompt. It is an utility to add useful information to Bash (or Zsh) prompts, based as you need it. For example, if you’re working in a Git repository, it will show you its status.

Thanks to X forwarding feature, it is possible to forward graphical programs using X11 to our host machine. To enable it, I added the following parameter to Vagrantfile, as described here:

After these steps, it was time to launch the provisioning to verify if the setup was ok. I launched the VM with the classical vagrant up command and I logged in it with the vagrant ssh command. Once in, I’ve cloned the “Hello world” Electron repository to verify the VM configuration:

At first shot, I came across a set of problems, due to missing Ubuntu packages for graphical components. For example I got:

Trying with repeated executions of apt-get commands, one by one, I got rid of all these missing libraries. So, at the end, I had to install all the following to remove the errors:

These apt-get commands have been added to the root provisioning script in order to set up the VM properly.

After all this tuning, I started the Vagrant VM and launched the electron-quick-start again. This time it worked displaying, the following: 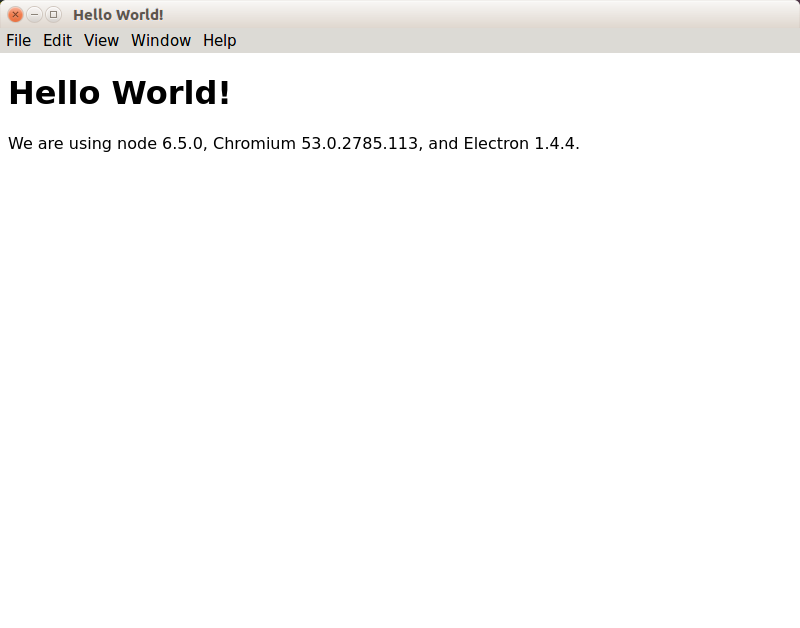 P.s.: if you need explanation of any of the listed ssh commands, please refer to explainshell.com, I find it very useful!”


I was listening to: